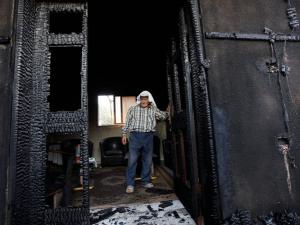 On January 3, 2016, Israeli prosecutors filed a murder indictment against 21-year-old Amiram Ben-Uliel for reportedly firebombing the Dawabsha family home in the West Bank village of Duma, which killed 18-month-old Ali and his parents Saad and Riham; five-year-old brother Ahmed remains hospitalized in Israel.

The July attack revived international attention on Jewish terrorism in Israel; but while this case was lethal and extraordinary, other acts of violence against Palestinians are routine. In October 2014, for instance, the Washington Post reported that Palestinian olive farmers were once again bracing themselves in anticipation of Israeli settlers violently descending on their groves during the picking season. In 2013, settlers destroyed or damaged nearly 11,000 olive trees, according to the United Nations. That same year, the UN reported 386 assaults on Palestinians by Jewish settlers along with 50 attacks on Israelis by Palestinians in the West Bank. An oft-heard narrative of a cycle of violence would be false: Israeli settlers are protected by the occupying authority, which often arms them as well. (American-born settler Baruch Goldstein used an IDF-issued Galil assualt rifle to massacre 29 Palestinians at the Haram al-Ibrahimi in Hebron in February 1994.)

As Nasser Abu Farha, an olive grower, told the Post, “This is not only the fault of the settlers. The settlers who live in the security zone protected by the Israeli soldiers are the most vicious.” Another Palestinian farmer added, “If the settlers did not have the protection of the army, they would not dare touch our trees.”

Under the Geneva Conventions, an occupying power is responsible for protecting the local population, but, as Israeli human rights organization B’Tselem has documented, settlers often attack Palestinians behind the cover of Israeli soldiers; what B’Tselem has called “tacit support of the settler rampage by forces on the ground.” Yesh Din, an Israeli NGO, has similarly reported that the Israel Defense Forces “shirks its obligation to protect the Palestinian population of the West Bank” in a report it appropriately titled “Standing Idly By.”

Akin to the public lynching of African-Americans in the Jim Crow South, routine violence against Palestinians would likely be far less frequent if not for the widespread official leniency toward Jewish perpetrators: Yesh Din reports that 85.3% of police investigations into settler violence are closed due to failure to locate suspects, only 7.4% yield indictments, and Palestinians have only a 1.9% chance that a complaint will be carried out to indictment and conviction.

The history of Jewish terrorism, however, predates the 1948 birth of Israel (albeit, in recent decades, it has acquired a fundamentalist garb). The Israeli settler movement and its contemporary allies are the descendants of Revisionist Zionist organizations that engaged in terrorism during the British Mandate years (1920-48) against both the Palestinians and the British. The Lehi (or “Stern Gang”) and Irgun, for instance, were notorious for bombing Palestinian cafes, buses, markets and cinemas; which cost the lives of hundreds of Arabs. While terrorism against Palestinians was far more frequent, the September 1948 murder of the UN representative to Palestine, Count Folke Bernadotte, and the July 1946 bombing of the British office at the King David Hotel by Revisionist terrorists made headlines around the world. In recent years, the most publicized act of Jewish terrorism was not against a Palestinian, but the late Prime Minister Yitzhak Rabin.

For our January Special Focus – Zionist Terrorism, Then and Now, we are highlighting a series of articles from our Journal of Palestine Studies on the history, animating ideology and context of Jewish terrorism in Mandate Palestine and Israel.

The Other Shift: Settler Colonialism, Israel, and the Occupation

The “Western Wall” Riots of 1929: Religious Boundaries and Communal Violence

The Tantura Case in Israel: The Katz Research and Trial

The Old City of Hebron: Can It be Saved?

Background to a Massacre

The Ascendance of Israel's Radical Right. by Ehud Sprinzak

Zionist-Revisionism: The Years of Fascism and Terror

Zionist Settlement Ideology and Its Ramifications for the Palestinian People

Israeli State Terrorism: An Analysis of the Sharett Diaries

The Settlement Monitor covers items – reprinted articles, statistics, and maps – pertaining to Israeli settlement activity in the West Bank, East Jerusalem, and the Golan Heights since 1993 and updated quarterly.

The Karp Report : An Israeli Government Inquiry into Settler Violence Against Palestinians on the West Bank

This book contains the entire report of the committee formed in 1981 by the Israeli attorney general and headed by his deputy Judith Karp to investigate Israeli settler practices towards the Palestinians in the West Bank. The Committee was formed in response to a petition protesting these practices signed by 14 professors of law in Israeli universities. Numerous obstacles were put in the committee's way by the army, police, and settlers. After publication of the report, the government ignored it, eventually leading to the resignation of the head of the committee. The report was finally published as a result of intense pressure in 1984 exposing numerous acts of violence carried out by Jewish settlers against Palestinian Arabs in the West Bank, including assaults, destruction of property, armed threats, shootings, blocking access to places of employment, and attacks on schoolchildren.