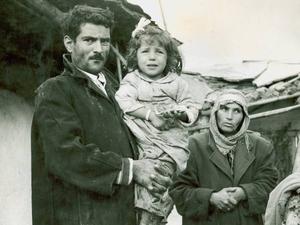 The November 1947 United Nations General Assembly partition resolution apportioning fifty-five percent of historic Palestine to a Jewish state was all but an invitation for the Yishuv’s (the pre-Israel Jewish community) paramilitary forces to expel and confiscate the lands of the mainly Palestinian peasantry residing within that half of the country. [1] Palestinians constituted two-thirds of the population in the whole of the country and were nearly on par with the Jewish population within the fifty-five percent. Of the nine districts of Palestine (out of sixteen) allotted to the Jewish state, the Jewish population lacked a majority in all but one and was heavily concentrated in three cities: Tel Aviv, Haifa, and Jerusalem (the latter preserved as a corpus separatum). “Outside the urban areas in the UN-proposed Jewish state, the Arab rural population greatly outnumbered the Jewish population.” [2] Jewish land ownership was little more than a tenth of the land holdings within the proposed Jewish state. In order to establish a viable Jewish state, where the Jewish people are strong in numbers and masters of the land, the very act of forcefully transforming the land was obligatory for the Yishuv.

“From December 1947 until the declaration of the Israeli state on 14 May 1948 . . .  the [Yishuv’s] paramilitary forces had already destroyed the fabric of Mandatory Palestinian society, triggered the Palestinian exodus, conquered major Arab towns and scores of Arab villages . . . .” [3]

This chronology of events before Israel’s declaration of independence serves as a historical corrective to the narrative that the nascent Jewish state was the victim of Arab aggression. That declaration enabled Israel to seize seventy-eight percent of the land between the River Jordan and Mediterranean Sea. By the war’s end in 1949, roughly 750,000 Palestinians were settled in refugee camps in the West Bank and the Gaza Strip along with Lebanon and Syria.

Seeking to ameliorate a problem it created, the UN General Assembly established the United Nations Relief and Works Agency for Palestine Refugees in the Near East (UNRWA) on 8 December 1949 to provide humanitarian welfare to Palestinian refugees, defined as “persons whose normal place of residence was Palestine during the period 1 June 1946 to 15 May 1948, and who lost both home and means of livelihood as a result of the 1948 conflict.” [4] The agency began operations on 1 May 1950. Today, UNRWA aids nearly five million Palestinian refugees across fifty-nine recognized refugee camps in the Israeli-occupied West Bank and Gaza Strip, Jordan, Lebanon and Syria. Most of the descendants of the Nakba, or Catastrophe, remain in the same (far larger) camps settled generations ago as Israel continues to deny them the right to “return to their homes” consecrated in yet another UN resolution. [5]

UNRWA, the UN’s largest agency, operates more than 700 schools, over a hundred clinics, and provides social services from rebuilding Palestinian homes destroyed by Israel, food and cash supplements to the most destitute of refugees, to microfinance loans and infrastructure projects. [6] Within refugee camps, UNRWA’s long-standing assistance has become such an institutional safety net for refugees that the agency operates akin to a government and in the West Bank and Gaza many refugees snub the Palestinian Authority for fear of losing their assistance from UNRWA. UNRWA’s intertwined history with the Palestinian refugees, its prevalent role in the camps, and the fact that it is nearly wholly staffed by Palestinians has made the agency a central part of the Palestinian story.

As part of our Special Focus – UNRWA to mark the 66th anniversary of UNRWA, the Institute for Palestine Studies has made available a series of articles* from the Journal of Palestine Studies. This archival collection includes “UNRWA and the Palestinian Nation-Building Process,” “The Urban Redesign of the Jenin Refugee Camp,” “UNRWA and the Refugees: A Difficult but Lasting Marriage,” and several other invaluable reports. We’d also like to remind our readers about I Would Have Smiled: Photographing the Palestinian Refugee Experience, edited by Issam Nassar and Rasha Salti and published by IPS. I Would Have Smiled is a tribute to Myrtle Winter-Chaumeny, a photographer who devoted her career to documenting the lives of Palestinian refugees and was responsible for establishing the largest archive on the refugees’ life, the UNRWA photo archive. The photographic collection also features original contributions from several scholars and writers on the refugee experience.

In presenting this month’s Special Focus - UNRWA against the backdrop of the Gaza Strip (where seventy percent of residents are refugees) still in the midst of recovery after a devastating Israeli assault last summer and the recent news of the storming of the Yarmouk refugee camp in Damascus by rebel fighters and shelling by the Assad regime, which has left besieged camp residents even more vulnerable, we hope to contribute to our readers’ understanding of the history and mission of UNRWA. [7]

Educating a Community in Exile: The Palestinian Experience

Education for the Palestine Refugees: The UNRWA/UNESCO Programme

Between Occupier and Occupied: UNRWA in the West Bank and the Gaza Strip

UNRWA and the Palestinian Nation-Building Process

Refugee Camps in the Palestinian and Sahrawi National Liberation: A Comparative Perspective

UNRWA and the Refugees: A Difficult but Lasting Marriage

[2] Palestinian families fleeing the city of Jaffa in April 1948. This coastal Mediterranean city was allotted to the Arab state in the partition plan. The left-wing Zionist paramilitary force, the Haganah, was in the midst of negotiating terms of surrender with the mayor of Jaffa when the right-wing Zionist rival force of the Irgun launched a three-day shelling against Jaffa's Palestinian population in a bid to conquer the city and outflank the Haganah. Tens of thousands of Palestinians were compelled to flee. This act of violence, as the aforementioned date makes clear, also preceded Israel's declaration of independence. Needless to say, displaced Palestinians were prohibited by Israel from returning to their homes. Copyright UNRWA.

[3] UNRWA emergency camp set up on the east bank of the River Jordan after the 1967 Six Day War between Israel, Jordan, Egypt and Syria. The war created yet more Palestinian refugees. Copyright UNRWA.