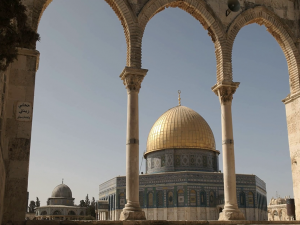 Trump’s recognition of Jerusalem as Israeli capital this past Wednesday has caused a fury of opposition around the world. As protests of his decision continue, this month’s Special Focus offers eight Journal of Palestine Studies articles* that, together, shed light on the status of Jerusalem and on the likely consequences of Trump’s decision.

In Walid Khalidi’s “The Ownership of the U.S. Embassy Site in Jerusalem,” the doyen of Palestinian historians investigates the history of the “Allenby Barracks” site that Israel has proposed as a site for the embassy.

As close observers of Jerusalem, Danny Seidemann, Nazmi Jubeh, and Nadera Shalhoub-Kevorkian offer granular and often painful descriptions, both from the ground up and analytically, of the Israeli occupation regime’s ceaseless encroachment on the rights, patrimony, space, and lives of the more than 300,000 Palestinian residents of occupied Arab East Jerusalem.

Ian S. Lustick examines the imagined contours of Jerusalem and argues that a final status agreement could offer Israelis a Hebrew “Yerushalayim” and Palestinians an Arab “al-Quds.” Picking up on that thread, Rashid Khalidi argues that an equitable arrangement between Israel and Palestine in Jerusalem is central to the success of any final settlement and outlines what that agreement might entail.

Palestinians in Jerusalem want only to live a normal life in their own city. But, as these accounts make clear, Jerusalem is not the city of its Arab residents, any more than Israel is the state of all its citizens. For the Israeli government, both belong exclusively to the Jewish people. This is a state of affairs that has repeatedly produced the unrest in the city in recent years and indeed, as Daniel Seidemann shows, since much earlier.

*The articles will be available at no charge for the duration of this month, December 2017. You can purchase a subscription for the Journal of Palestine Studies here.

The Centrality of Jerusalem to an End of Conflict Agreement
Rashid Khalidi
Journal of Palestine Studies, Vol. 30, No. 3 (Spring 2001), pp. 82-87