The Second Intifada, Then and Now 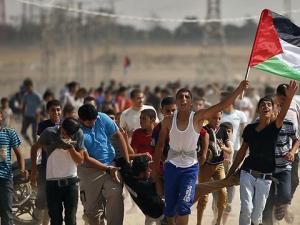 The Second Intifada, Then and Now

The end of September marked 16 years since the outbreak of the Second Intifada, also known as al-Aqsa Intifada. The uprising was triggered by the visit to Haram al-Sharif of former Israeli cabinet minister and Likud leader Ariel Sharon, in an attempt to mobilize his political base. Contravening the long-standing status quo arrangements at the sanctuary, the gesture was a widely held to be a deep provocation to the Palestinians.

Escorted by hundreds of Israeli riot police, including a helicopter, on Thursday 28 September 2000, Ariel Sharon led a group of Israelis into the compound at Haram al-Sharif, violating the terms of the status quo in Jerusalem.  According to the historical   arrangement governing the site, which both Jews and Muslims recognize as sacred to their traditions, the compound is administered by the Islamic Waqf. By storming the compound and entering al-Aqsa Mosque with his supporters under heavy military escort, Sharon was signaling that Israel had total control of the site and could disregard centuries-old arrangements between Muslims and Jews.

The current situation in the occupied territories and Jerusalem, particularly the surge of violence (habba in Arabic) that began in 2015, is in many ways reminiscent of the period leading up to the Second Intifada. At the time, continued settlement expansion and the failure of the talks at Camp David in the summer of 2000 – to finalize implementation of the 1995 Oslo Accords, originally drawn up as interim agreements – reinforced Palestinian public disillusion with the so-called peace process. For the Palestinians, Sharon’s visit was emblematic of Israel’s attitude: contempt for legal agreements and a determination to impose its writ.

Currently, there is a French-led peace initiative under way as well as a rumored UN Security Council resolution favorable to Palestine. In our view, the success of such international diplomatic efforts hinges upon an understanding of recent history, and particularly the causes that led to the Second Intifada. The parallels are inescapable between the circumstances prior to the Second Intifada and current diplomatic efforts to salvage the peace process.

On this anniversary, for our October Special Focus – The Second Intifada, Then and Now, we have made available articles* from the Journal of Palestine Studies chronicling the Second Intifada in real time, including: a firsthand account of the talks at Camp David; an examination of the brutal Israeli operations against Palestinians during the uprising; and Jerusalem’s centrality in establishing a definitive peace. These articles, we hope, will offer readers the critical historical context necessary to understanding the current and volatile status of affairs in Palestine.

*These articles will only be available for the duration of this month’s special focus.