Sabra and Shatila: A Haunting Microcosm of Continuing Systematic Violence 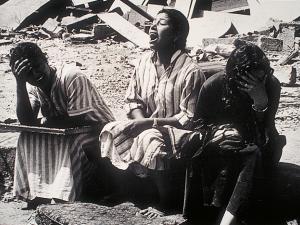 Sabra and Shatila: A Haunting Microcosm of Continuing Systemic Violence

It’s been thirty four years since the 16th of September 1982, when over 1,300 Palestinian civilians were massacred at Israel’s command by the Lebanese Christian Phalange militia at the Sabra and Shatila refugee camps, south of the capital city Beirut. The untold horrors of the massacre have since become a national Palestinian emblem of collective memory, commemorated year after year across historic Palestine and the diaspora.

However, while most commemorations simply celebrate or mourn an event of the past, Sabra and Shatila remain an omnibus presence in Palestinian life. In fact, horrors of this extent have been seen before and after 1982: Deir Yassin in 1948, Shuja'iyya and Khuza’a in 2014 are exemplary. It is neither the extent of damage, time and place, nor the count of casualties that bring these events together. Rather, a systematic use of violence aimed at displacing not only the physical presence of Palestinians, but also their collective memory of, and yearning for, a homeland through the repeated infliction of violence over an extended period of time which has been reinforced by a variety of political and legal tactics.

For our September Special Focus – Sabra and Shatila: A Haunting Microcosm of Continuing Systemic Violence, we are featuring a collection of articles* on the massacre, Israeli tactical use of policy and law to inflict violence, and the broad implications of such experiences on Palestinian memory and present.

*These articles will only be available for the duration of this month’s special focus.