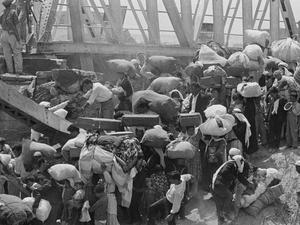 June marks the anniversary of the 1967 War. While the Nakba – or “catastrophe” – of the 1948 War, with the expulsion of 700,000 Palestinians from their homeland, stands as the defining moment of modern Palestinian history, the 1967 War was yet another key turning point that would prefigure the subsequent decades of conflict and negotiations between Israel and the Palestinians.

In six days of war, Israel routed Egyptian, Syrian and Jordanian forces and bestrode the region as the unparalleled power, stamping its flag over the rest of historic Palestine (East Jerusalem, the West Bank and Gaza), Egypt’s Sinai Peninsula and Syria’s Golan Heights. The war was dubbed the "Setback" – the Naksa – a misfortune that pointed up the need for a new strategy for confronting Israel and redeeming Palestine.

For Palestinians, the Naksa made clear the futility of relying on Arab regimes. Concerned solely with self-preservation, these regimes would never marshal a unified front capable of inducing Israel to make amends for 1948 and restore to the Palestinians even some of their rights and belongings. Many Palestinians already harbored a bitterness toward the erstwhile Arab states that had promised to preserve the “Arab character” of Palestine, but were indecisive against an ambitious foe determined to erase it. The Arab nationalists who overthrew their monarchial or patrician and parochial regimes in the 1950s had proved themselves no more fit for the fight than their predecessors. Furthermore, these ostensibly revolutionary regimes had sought to curtail and co-opt the Palestinian resistance to serve their own ends. If the Palestinians were to have any hope, they must take their fate in their hands. The June 1967 War renewed the Palestinian struggle against Zionism as a new generation took the helm of political and guerilla organizations and reminded the world that an Arab people did, indeed, exist “in the land of Israel,” an indigenous people in conflict with a colonial-settler state that had dispossessed them.

For Israel, the 1967 War appeared to solidify its hold on historic Palestine. After 1948, Israel controlled 78% of Mandatory Palestine, a territory 40% greater than the original allotment to a Jewish State in the 1947 United Nations Partition Plan (55% of Mandatory Palestine). The 1967 War shifted the area of contestation from historic Palestine to the 22% of historic Palestine that came under Israeli control. When the UN Security Council passed Res. 242 to reaffirm the “inadmissibility of the acquisition of territory by war,” in the eyes of the much of the world, everything before 1967 was legitimatized as irrevocably Israeli while the West Bank, Gaza and East Jerusalem were now the “Occupied Palestinian Territories” (OPT). These new parameters were eventually accepted by the Palestine Liberation Organization, which rescinded its original goal of full liberation for the elusive hope of a truncated and bifurcated state. Meanwhile, Israel’s extraordinary victory sparked a Jewish Messianic movement that interpreted triumph as a divine blessing to colonize the West Bank, home to the ancient domains of the Jewish kingdoms. Thus began Israel’s settlement policy and its corollary of Palestinian land expropriation.

For our Special Focus – The Naksa, 49 Years Later we are highlighting a series of articles* from our JPS archives that relate the Naksa and its ongoing consequence. The 1967 War established the parameters for conflict resolution between Israel and the Palestinians as currently accepted, in principle, by both the Israeli government and the Palestinian Authority in the occupied West Bank, along with all the major powers. Resolution 242’s call for Israel to withdraw from territory occupied in the preceding war effectively set the floor for Israeli “concessions” and the ceiling for Palestinians rights to statehood; in other words, the two-state solution. Forces unleashed in 1967, however, have obstructed any resolution. In Israel, an ascendant religious-nationalism allied with security hawks refuses to countenance any withdrawal and this dominant current in Israeli politics threatens Israel’s legitimacy through an interminable occupation that erases the 1967 lines and restores the site of contestation to the whole of Palestine/Israel. For the Palestinians, their would-be state slowly vanishes as one hilltop after another is taken over by Israeli settlers and Palestinian cities and villages are transformed into an archipelago surrounded by Israeli road blocks, checkpoints, walls and fences.

In such a context, a national struggle appears irrelevant and the only path present may be a civil rights struggle for equality. An international community led by the United States has preached a “peace process” for more than twenty years, but has accomplished nothing more than conflict management at ever increasing patrimonial loss for the Palestinians. Israel is less willing to relinquish any land than ever before in its history, while the Palestinian leadership is at its lowest point in strategy and vision since the years after the Nakba. It is not clear what awaits the new boundaries established in the post-1967 War: one-state, two-state, apartheid, binational state, Arab-Jewish confederation, et cetera . . .

In the articles below, we offer no easy answers or predictions, but, rather, seek to provide readers with information about the unfolding historical processes unleashed by the June war: the “peace process,” Israeli settlements, the Palestinian resistance, the Palestinian Authority, and the opportunities for ending an occupation that will soon mark 50 years. This Special Focus provides a fuller understanding of the last half-century shaped by the 1967 War.

Neoliberalism as Liberation: The Statehood Program and the Remaking of the Palestinian National

Open Forum: Alternatives to the One-State and Two-State Solutions

Forty Years after 242: A “Canonical” Text in Disrepute?

Palestine Versus the Palestinians? The Iron Laws and Ironies of a People Denied

Palestinian Society and Economy: The Continued Denial of Possibility

The Oslo Agreement as an Obstacle to Peace

The Real Meaning of the Hebron Agreement

Zionist Settlement Ideology and Its Ramifications for the Palestinian People

Developments and Setbacks in the Palestinian Resistance Movement, 1967-1971