Jerusalem: Why the Violence Never Ends 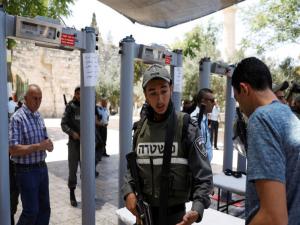 Jerusalem: Why the Violence Never Ends

The ongoing escalation in Jerusalem has resulted once again in Israel changing the status quo in its favor. On Friday, July 14, a deadly shooting in the Old City that ended at the Haram al-Sharif left three Palestinians and two Israeli policemen dead. Israel imposed an unprecedented complete closure on the holy site for two days. The security services searched the al-Aqsa Mosque, the Dome of the Rock, offices, libraries, and other buildings in the compound with their characteristic callous disregard for sanctity or property. The Haram was only re-opened after metal detectors had been installed at its entrances. Most Palestinians have since refused to pray there, insisting that the metal detectors infringe on their freedom of worship. Days after the incident, an atmosphere of fear continues to reign in the Old City because of the heavy security presence and the banning of all non-residents including shopkeepers, workers, and providers of vital services. Israel has used the July 14 incident to strengthen its chokehold on Jerusalem and its control over the third holiest site in Islam.

This month’s Special Focus offers eight Journal of Palestine Studies articles* that, together, shed light on the status of Jerusalem and on the consequences of Israel’s heightened repression of Palestinians in occupied East Jerusalem.

In Walid Khalidi’s seminal “The Ownership of the U.S. Embassy Site in Jerusalem,” the doyen of Palestinian historians investigates the history of the “Allenby Barracks” site that Israel has proposed as a site for the United States embassy. The article meticulously documents the original Palestinian land deeds and demonstrates that the site is an expropriated waqf and the private property of Jerusalemite Palestinians forced out of West Jerusalem in 1948. In a related article, Gish Amit documents Israel’s confiscation of private libraries during the conquest of Palestinian neighborhoods in West Jerusalem, which continue to be held as so-called absentee property. The preeminent Palestinian intellectual, the late Edward Said, called on Palestinians to challenge Israel’s attempt to reconfigure Jerusalem from “a multicultural and multi-religious city into an ‘eternally’ unified, principally Jewish city under exclusive Israeli sovereignty” by offering an alternative vision for a pluralist Jerusalem, one rooted in humanitarian and universal values that would not only be more faithful to the city’s history but also its “very lived actuality.”

As close observers of Jerusalem, Danny Seidemann, Nazmi Jubeh, and Nadera Shalhoub-Kevorkian offer granular and often painful descriptions, both from the ground up and analytically, of the Israeli occupation regime’s ceaseless encroachment on the rights, patrimony, space, and lives of the more than 300,000 Palestinian residents of occupied Arab East Jerusalem.

Ian S. Lustick examines the imagined contours of Jerusalem and argues that a final status agreement could offer Israelis a Hebrew “Yerushalayim” and Palestinians an Arab “al-Quds.” Picking up on that thread, Rashid Khalidi argues that an equitable arrangement between Israel and Palestine in Jerusalem is central to the success of any final settlement and outlines what that agreement might entail.

Palestinians in Jerusalem want only to live a normal life in their own city. But, as these accounts make clear, Jerusalem is not the city of its Arab residents, any more than Israel is the state of all its citizens. For the Israeli government, both belong exclusively to the Jewish people. This is a state of affairs that has predictably produced the unrest that has been roiling Jerusalem since the autumn of 2015 and indeed, as Danny Seidemann shows, since much earlier.

*The articles will be available at no charge for the duration of this month, July 2017. You can purchase a subscription for the Journal of Palestine Studies here.

The Centrality of Jerusalem to an End of Conflict Agreement
Rashid Khalidi
Journal of Palestine Studies, Vol. 30, No. 3 (Spring 2001), pp. 82-87