Israel and the U.S. Congress 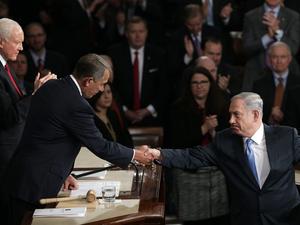 Israel and the U.S. Congress

The present battle by the American Israel Public Affairs Committee (AIPAC) to scuttle the 14 July Iran nuclear agreement may prove to mark a pivotal moment in the history of the organization and its status as vanguard of the so-called “Israel lobby.” AIPAC is fully mobilized against the American president, and its success or defeat may very well determine its future clout on Capitol Hill. The organization has reportedly poured over $20 million into television advertising [1] against the Joint Comprehensive Plan of Acton and dedicated its website and social media accounts to broadcasting constant attacks against the deal’s terms.

Nonetheless, President Barack Obama looks likely to secure enough votes in Congress to sustain his veto of an inevitable Republican vote against the agreement. AIPAC may count on a unanimous Republican voting bloc, but this will hardly confer bragging rights as very few, if any, Republicans were poised to support the agreement. It is the Democratic Party that is increasingly critical of the Jewish state and whom AIPAC is alienating by working to sink the president’s key diplomatic achievement. In the off chance AIPAC’s lobbying convinces enough Democrats to side against their president, support for Israel will be greatly undermined among American liberals and war-weary Americans, especially if a failed agreement forces the United States into yet another Middle Eastern conflict.

For AIPAC and Israel, the Iran deal could foreshadow significant loss of domestic and international standing. Ever since professors John Mearsheimer (University of Chicago) and Stephen Walt (Harvard) published "The Israel Lobby" [2] nearly a decade ago, an increasing number of commentators have echoed their argument that organizations like AIPAC promote an American foreign policy at odds with American interests. A defeat for AIPAC over the Iran deal would likely add to the chorus and might encourage members of Congress to voice their own private concerns publicly. An AIPAC incapable of delivering on its highest priority and unable to persuade the representative with the largest Jewish constituency in the country [3] is a lobby that may be rebuffed on other issues as well, and the current moment may prove true a recent speculation in the New Yorker that AIPAC is “losing influence.” [4]

It matters a great deal that Israel has so publicly lost on an issue it has chosen to define as being of existential importance in an arena where Israeli governments have traditionally enjoyed greater support than in the Israeli Knesset. The clear message that when push comes to shove it is the United States and not Israel that dictates American foreign policy has not gone unnoticed. Those nations who have traditionally looked to Israel to assist their relations with Washington may well begin to look for other friends to help them obtain American benefits. [5]

For our September Special Focus – Israel and the U.S. Congress, we have made available a series of articles* from our Journal of Palestine Studies archive that address the history, context and consequences of pro-Israel lobbying of the House of Representatives and Senate, along with an interview with John Mearsheimer on the Israel lobby conducted by Palestine Studies TV. In addition, we would like to remind readers of our special Virtual Issue of the Journal of Palestine Studies on the U.S., Israel and Iran. For those interested in further study, we recommend original IPS publications American Jewish Organizations and Israel by Lee O'Brien, which may have been the first comprehensive study of pro-Israel lobbying organizations, and The United States and the Palestinian People by Michael E. Jansen, whose author challenges “the mistaken assumption that U.S. and Israeli interests coincide in the Middle East.”

Our Congressional Monitor tracks every legislative initiative introduced in the U.S. Congress that mentions Palestine or Israel or has bearing on the Arab-Israeli conflict, including the Iran nuclear issue. It is updated on an ongoing basis and features summaries of legislation from every Congressional session since 2005. Read the most recent summary: 113th Congress, Second Session: January 2014 - January 2015.

Follow our Special Series on 2016 Presidential Election on our blog Palestine Square.

Israel, the Palestinians, and the 2012 Republican Primaries: Fantasy Politics on Display

Truman the Politician and the Establishment of Israel

The Power of Israel in the United States by James Petras; The Israel Lobby and U.S. Foreign Policy by John J. Mearsheimer, Stephen M. Walt

Rep. Jim Moran (D-VA), Comments on the Influence of the Pro-Israel Lobby, Tikkun, May 2007

The Dare to Speak Out: People and Institutions Confront Israel's Lobby by Paul Findley

Congress and the Pro-Israel Lobby

Israel's Power in the US Senate

Senator William Fulbright on the Great Powers and the Conflict