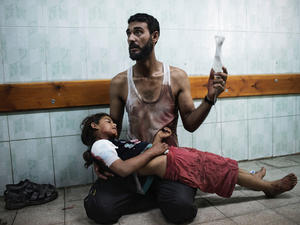 At present (8 August 2014), over 1,800 Palestinians have been killed and more than 10,000 have been injured since the Israeli military assault of the Gaza Strip began Tuesday, July 8th. Many of those dead are women and children; the youngest victim was 18-month-old Mohammed Melkiye, who was killed alongside his 27-year-old mother by an Israeli airstrike.

As Israel continues its third war against the people of Gaza since 2008, the Institute for Palestine Studies remains committed to accurately documenting and recording the conflict and its preceding history.

As part of that effort, our July-August Special Focus - Gaza Under Attack includes articles* from the Journal of Palestine Studies detailing past major Israeli military assaults on Gaza, the continued siege of Gaza imposed by Israel and Egypt after the 2005 disengagement, and reports on the broader implications of the continued destruction and suffering wreaked upon the Gaza Strip.

Israel has called its most recent offense Operation Protective Edge. In December 2008, Israel conducted Operation Cast Lead, a 22-day assault that resulted in more than 1,400 Palestinian deaths and more than 4,300 injuries. In November 2012, Israel carried out Operation Pillar of Defense, killing over 177 Palestinians in Gaza in eight days, mostly civilians. Residents of the Gaza Strip are unable to evacuate or escape Israeli airstrikes because of the restrictions on movement enforced by both Israel and Egypt.

Reflection on the War on Gaza

The Israeli Arsenal Deployed against Gaza during Operation Cast Lead

Made in the U.S.A.: American Military Aid to Israel

The Gaza Strip as Laboratory: Notes in the Wake of Disengagement