Egypt and the Palestinians 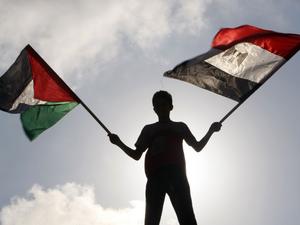 Egypt and the Palestinians

Writing in the Journal of Palestine Studies, Sabri Jiryis remarked on Egyptian President Anwar Sadat’s journey to Jerusalem: “For half a century since the meeting between the Emir Faisal, son of Sherif Hussein of Mecca, and the Zionist leader Chaim Weizmann in June, 1918, no Arab leader had publicly met with any Zionist or Israel official. Here, now, was the president of the largest Arab country visiting Israel . . .  it is clear that the Middle East in particular and the Arab world in general have entered a new era when developments cannot be easily foreseen.” [1]

Nearly four years after his speech to the Israeli Knesset, Sadat was assassinated by Islamist militants opposed to the 1979 Egyptian-Israeli peace agreement. The Camp David agreement brokered by U.S. President Jimmy Carter, however, survived its protagonist’s untimely death and ushered in a realignment in the Middle East: the formerly pan-Arab Egypt of Gamal Abdel Nasser made its separate peace with Israel and ditched Soviet patronage for American military aid. And while Sadat entered negotiations with an intention to secure a political resolution for the Palestinians, he eventually abandoned that track for a unilateral agreement that effectively permitted Israel to hand over the Sinai and pocket the West Bank.

Peace with Egypt neutralized the Jewish state’s most formidable foe. Add to the picture Lebanon’s ongoing civil war and Jordan’s spurning of the Palestine Liberation Organization and unspoken cooperation with Israel, and Israel was now unencumbered to pursue its ambitious land grabs—a reality foreseen by Egyptian Foreign Minister Muhammad Ibrahim Kamel, who pleaded at Camp David that an agreement that left out the Palestinians and permitted illegal Israeli settlements would foreclose the possibility of Palestinian self-determination. His prescient analysis was ignored by Sadat, and Kamal resigned in protest, refusing to sign the agreement.

An authoritarian leader, Sadat cultivated his own supporters who dutifully concocted the image of the "bad Palestinians" in Egyptian newspaper columns to justify an agreement widely condemned in the Arab world as a selfish pursuit of narrow national interest at the expense of the Palestinians: “the Palestinians sold their land to the Jews and are therefore solely responsible for their tragedy; the Palestinians live like millionaires and profit from their national cause; . . . the wars Egypt waged against Israel "for Palestine" are responsible for its economic woes, so peace should bring prosperity.” [2]

Decades later, Egyptian-Israeli relations are arguably more cooperative than ever before. Nowhere is this better illustrated than in Gaza Strip, where both nations enforce a crippling blockade on the territory ruled by the Hamas government. During Operation Protective Edge (July-August 2014), Egypt’s President Abdel Fatah al-Sisi did little to hide his support for Israel’s attacks on Hamas (due to Gaza’s population density, the attacks inevitably killed and maimed more civilians than suspected militants; a reality further worsened by Israel’s liberal use of heavy firepower in civilian neighborhoods, which elicited no protest from Egypt). Hamas, after all, is the Palestinian offshoot of the Egyptian Muslim Brotherhood, which was deposed and subsequently repressed in the wake of Sisi’s coup against the democratically elected government of former President Mohammad Morsi. Many observers also believe that Sisi offered Israel diplomatic cover to further escalate the summer war by proffering a cease-fire proposal as a fait accompli without consulting Hamas. Hamas predictably rejected a proposal of which it had no prior knowledge and offered only a return to the bleak status quo ante. The rejection was a coup for the Israelis: an Israel eager to “mow the grass” in Gaza could accept an agreement it knew Hamas would reject, allowing the Israelis to appear as the peace-seekers regretfully left with “no choice but to expand and intensify the campaign” against a recalcitrant Hamas; but, now, as Israeli Prime Minister Benjamin Netanyahu hastened to add, Israel had “international legitimacy.” [3]

From Nasser’s championing of the Palestinian cause to Sadat’s willful neglect of Palestinian interests and, lastly, Sisi’s all-but-declared support for an Israeli war that devastated an already destitute Gaza, the arc of Egyptian-Palestinian relations has been remarkable. It signals the ascendency of American hegemony in the region, underscores the failure of the Palestinian leadership to solidify Arab ranks behind its nationalist struggle, and might now foreshadow anxious Gulf regimes striking their own separate deals with Israel in an anti-Iranian regional bloc. Syria’s civil war and the recent nuclear agreement between Iran and today’s great powers have upended the calculations of regional actors and lowered Palestine even further on the agenda of Arab states.

As part of our October Special Focus Egypt and the Palestinians, we have made available articles* from our Journal of Palestine Studies archives retracing the history of Egypt’s relations with Israel and the Palestinians. While future “developments cannot be easily foreseen,” knowing the history offers us the chance to cultivate a more intelligent sense of the future and where the stateless Palestinians might figure in the calculus of the region’s Arab states.

Lastly, we recommend our Book of the Month Unprotected: Palestinians in Egypt Since 1948 by Oroub el-Abed. You may purchase Unprotected at our Bookstore.

The Road to Jerusalem through Tahrir Square: Anti-Zionism and Palestine in the 2011 Egyptian Revolution

Nasir's Egypt and the Reemergence of the Palestinian National Movement

Israeli Reactions to Peace in the Middle East

The Reaction in Israel to the Sadat Initiative

The Arab World at the Crossroads: An Analysis of the Arab Opposition to the Sadat Initiative