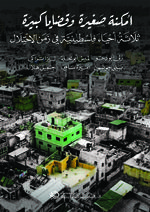 The book is a multi-faceted examination of the ways in which individuals, families, communities, formal organizations, informal associations, and social groups have confronted, shaped, and been affected by the profound transformations wrought by the second intifada and Israeli attempts to suppress it since September 2000.

The Ramallah-area communities under study are the Am’ari refugee camp, the Umm al-Sharayit, and the Masyoun. The themes raised were explored in interviews conducted over three years in these communities. The authors situate the three communities in the larger social universe of Ramallah and al-Bira and point to significant differences in the making of community, identity and place in the three settings.

Rula Abu DUHOU is a researcher and lecturer at the Institute of Women’s Studies at the University of Birzeit. She had a MA degree from the University of Birzeit for a study entitled “Women in the Leadership of the Palestinian Resistance during the 1967-1992 Period”. She is an activist who worked voluntarily at Addameer NGO for more than eight years archiving and researching the cases of detained Palestinian men and women in Israeli prisons. She is working now on a book tackling the detention experience and the Palestinian detained women based on her own experience as she was sentenced for 25 years in jail for resisting the occupation and spent nine years behind the bars. She is also studying for a second masters’ degree in Democracy and Human Rights.
Lamis Abu NAHLE is a professor and researcher at the University of Birzeit on the education of English and Arabic languages, linguistics as well as gender and development. She made many researches in Arabic and English over the following issues: gender and education, family and household, loan programs and small projects, disability, and the honor killing. She is also an advisor on the analysis and planning of the policies of programs and projects for development from a gender’s perspective, and the means to integrate this factor in planning, developmental policies and scientific researches. She is preparing for researches on weddings and their arrangements (jointly with Penny Johnson), and on the situation of old men and women in the Palestinian family.
Lisa TARAKI is associate professor of sociology at Birzeit University. She has published articles in books and professional journals on Palestinian mass organizations and the Palestinian national movement, Jordanian Islamists and gender relations, and various aspects of gender relations in Middle Eastern and Palestinian Society. She has also contributed to several commissioned reports in socioeconomic and gender issues in Palestine. She is currently researching urban life in Palestine.
Penny JOHNSON is a research associate at the Institute of Women’s Studies at the University of Birzeit. She lately worked on the issues of gender, law and citizenship, as well as social policy, families and war. She contributed in the preparation for the Islamic Encyclopedia of Women and Cultures, and The Encyclopedia of Social Policy. A study of hers was published in Signs journal (Volume 30, Issue 3, 2007). Johnson is a member of the National Anti-Poverty Committee and is currently member of the editorial board of Jerusalem Quarterly.
Amira SALMI is a teacher and researcher at the Institute of Women’s Studies at the University of Birzeit. She had a MA in gender, law and development from the same university for a research entitled “Representations of Palestinian Women in the Western Colonial Discourse”. Salmi worked as professor, coordinator of cultural activities and researcher in the popular campaign against the apartheid wall as she participated in the preparation and writing of the campaign’s report over the wall’s impact on Jerusalem and the surrounding area (2006).
Jamil HILAL is a sociologist and author. He wrote a number of books and articles. Following are some titles: "Israel's Economic Strategy for the Middle East", "The Palestinian Political System after Oslo", and "The Formation of the Palestinian Elite". He also has many contributions in Arab and foreign periodicals. He is currently co-editor of "Majallat al-Dirasat al-Filastiniyah".