The Nakba - In The Words of Palestinians 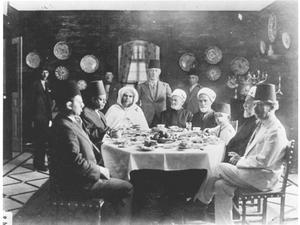 The Nakba - In The Words of Palestinians

There are so many ways to write about the Nakba – the Palestinian Catastrophe of 1948. One could start with Plan Dalet, the Yishuv’s (Jewish community in Palestine) master plan to expel Palestinian Arabs from within and outside the territory allotted to the Jewish state in the United Nation’s 1947 Partition Plan and its realization in the expulsion of 750,000 Palestinians from their homes by Zionist paramilitaries. [1] The massacre at Deir Yassin where the Revisionist Zionist Irgun and Lehi forces killed 107 Palestinian villagers. [2] And the columns of tens of thousands of villagers forced out of Lydda and Ramla – hundreds collapsing to their death – on the orders of future Israeli Prime Minister Yitzhak Rabin, who proclaimed “The inhabitants of Lydda must be expelled quickly, without regard to age.” [3] Israel’s post-war razing of over 400 villages and its establishment of forests over the ruins. In the aftermath of the Nakba, one could point to the renaming in Hebrew of over 100 villages – emptied of their Palestinians, and houses and lands handed over to Jewish settlers – along with thousands of hills, valleys and natural landmarks. “We are obliged to remove the Arabic names for reasons of state,” declared Israel’s first prime minister, David Ben-Gurion. [4] The Palestinian village of Ein-Ghazaleh became the Israeli Ein-Ayala. Jaffa became Yafo. Bir Seb’a became Be’er Sheva. One could also write about the destruction of the cultural and intellectual life of Palestine as artists, scholars, writers, journalists, and poets were dispersed into the diaspora. In the end, the Nakba was the devastation of an entire nation.

Palestine Before the Nakba, From top left to right: Mayor of Jerusalem Raghib al-Nashashibi gives a tea party at his home in honor of a Moroccan religious leader and scholar's visit to Jerusalem, 1930; A Christian wedding, Haifa, 1930; A soccer match in the Palestinian quarter of Bab al-Zahirah (Herod's Gate), outside of Jerusalem's Old City - perhaps the earliest photograph of a sports event in Jerusalem, date unknown; Jerusalem street scene outside Jaffa Gate, early 1940s; Ali al-Kassar, an Egyptian actor, visits friends in Jerusalem, 1934.

And one could add that the Nakba is not only a historical event, but an unceasing tragedy for the Palestinians. The expulsions and home demolitions may ebb and flow, but they continue without end. Today’s Israel – confident in its power, cautious of the international media, and eager to project a legal and moral legitimacy – has ditched mass expulsions for the more refined tools of incremental expulsions, land confiscations and house demolitions; always with a veneer of legality: ‘the construction lacked a permit,’ ‘a settler road is necessary,’ ‘simply a zoning matter,’ ‘we’re building a public park that will benefit Palestinians too,’ ‘we’ll give them better homes elsewhere. . . .’ and on and on. [5] New street signs are also going up: al-Nasrah (Nazareth) is renamed Nasrat and in Jerusalem only the Hebrew Yerushalaim appears. Moreover, Israel still denies refugees and their descendants the United Nations-mandated “right of return” to their ancestral lands. [6]

The Nakba. From left to right: Scenes of devastation in the Palestinian residential quarters of East Jerusalem, May 1948; Palestinians driven into the sea at Jaffa Harbor, late April 1948; Civilian inhabitants of Acre being herded into prison after the fall of the town, 17 May 1948; Women and children salvage some belongings as they flee Jaffa, 1948.

One could write all this and a thousand and one stories in between. And recited history serves the purpose of a “struggle of people against power,” in the words of the Czech writer Milan Kundera, “is the struggle of memory against forgetting.” But a historian’s gaze, edifying it may be, is incapable of conveying the intensity of an eyewitness account to history’s catastrophes.

The Institute for Palestine Studies has published countless books and articles on every imaginable aspect of the Nakba and its consequences to this day. On this Sixty-Seventh anniversary of the Nakba we have chosen to highlight our archival collection of articles* on the personal experiences of the Nakba. Rather than tracing the arc of history with its attendant figures, facts, and dates; where the individual experience is consumed by the collective narration, these articles remind us that the grand narrative is drawn by countless stories of individual struggle and loss.

An army officer lamenting the fall of Jaffa to the Zionists, “In this way the curtain was rung down on that heroic Arab city.” A Palestinian man, all but a child in 1948, reflecting on the emergence of consciousness that comes with age, “For us it did not begin in 1948. . . . It occurred when the Palestinian . . . asked . . . : who am I.” A Palestinian woman remembering a life of exile in England, “Our home soon acquired a reputation for being a home-away-from-home amongst newly arrived and homesick Palestinians.” These stories and more are found below.

We would also like to announce our Books of the Month: Expulsion of the Palestinians: The Concept of “Transfer” in Zionist Political Thought, 1882-1948 by Nur Masalha, Before Their Diaspora: A Photographic History of the Palestinians 1876-1948 by Walid Khalidi, and All That Remains: The Palestinian Villages Occupied and Depopulated by Israel in 1948 by Walid Khalidi. You may purchase the books by clicking on the embedded links or on the books covers below.

To be a Palestinian

After the Nakba: An Experience of Exile in England

From Seferberlik to the Nakba: A Personal Account of the Life of Zahra al-Ja'uniyya

Recollections of the Nakba through a Teenager's Eyes

BOOKS ON THE NAKBA & PRE-NAKBA PALESTINE

[5] B'Tselem - The Israeli Information Center for Human Rights in the Occupied Territories, UNDER THE GUISE OF LEGALITY Israel's Declarations of State Land in the West Bank, (Israel: B'Tselem, 2012), available from  http://www.btselem.org/sites/default/files2/201203_under_the_guise_of_le...

All photographs are from Before Their Diaspora: A Photographic History of the Palestinians 1876-1948 by Walid Khalidi. Visit the online website of the book.