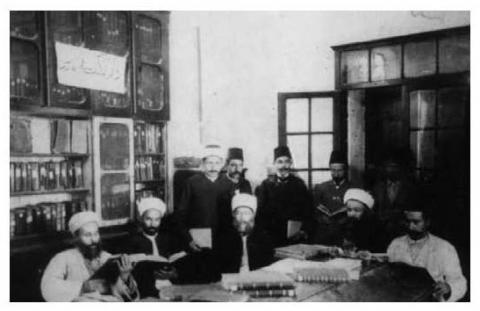 The Institute for Palestine Studies and the Khalidi Library in Jerusalem are pleased to announce their partnership to publish a series of six books highlighting the history of Jerusalem and its rich Arab and Islamic cultural heritage.  At a time when this heritage is at risk and faces Israeli measures that attempt to erase it, the objective of the series is to draw attention to under-appreciated facets of the history of Jerusalem and of the Khalidi Library’s place in it, and to ensure that this heritage is preserved for future generations.

The first book in the series, The Virtues of Jerusalem: An Analytical Study and Critical Reconstruction of “Fada’il Bayt al-Maqdis” by al-Walid bin Hammad al-Ramli, was published in December 2019 in Arabic.  Edited by Suleiman Mourad, Professor of Religion at Smith College, Massachusetts, USA, this book examines the oldest known example of a genre of books in the Islamic tradition extolling the virtues of the city of Jerusalem.  The al-Ramli text was written in the mid-ninth century and was entirely reconstructed from fragments by Professor Mourad, who also contributed an introduction analyzing its importance for understanding the history of the city and the centrality of Jerusalem to Arab and Islamic civilization.

The next volume The Other Jerusalem: Rethinking the History of the Sacred City, is an anthology of articles about little-known aspects of Jerusalem’s heritage and will appear in early 2020.  Edited by Salim Tamari and Rashid Khalidi, eminent scholars of Palestinian history and society, the anthology collects seminal articles previously published in the Jerusalem Quarterly and the Journal of Palestine Studies.  The articles range widely from urban planning to international law, highlighting diverse aspects of Jerusalem’s history and exposing the “memoricide” committed by Israel against the Palestinians through attempts to confiscate their cultural assets.

The subsequent volumes, to be published over the course of 2020, will focus on the history of the Khalidi Library and of the Khalidi family.  Two volumes (in Arabic) will be dedicated to the writings of polymath scholar and Ottoman politician Ruhi Khalidi (1864-1913).  The first, edited and introduced by preeminent historian of Palestine Walid Khalidi, is Ruhi Khalidi’s unpublished monograph on Zionism, the first known treatise on the subject by a Palestinian Arab thinker.  The second volume is a selection of Ruhi Khalidi’s most important writings on subjects ranging from comparative literature to the history of chemistry in the Islamic world, edited and introduced by Mariam al-Ali, professor of Arabic literature at Université St Joseph in Beirut, under the supervision of Islamic historian Tarif Khalidi.  The final two books to appear will be Arabic and English versions of a monograph by Walid Khalidi about the history of the Library and the family members associated with its founding.  The Khalidi Library was established in 1900 by members of the Khalidi family as a public library to provide a service to scholars; it houses one of the largest private collections of Arabic manuscripts in the Arab and Islamic worlds.

The publication series is made possible by a generous grant from the Arab Fund for Economic and Social Development, administered by the Welfare Association (Taawon).  It is overseen by the Research Committee of the Institute for Palestine Studies and the Academic Committee of the Friends of the Khalidi Library (USA), in consultation with the Library Administrators.