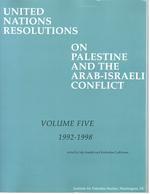 This unique five-volume collection brings together for the first time the texts of all the resolutions relevant to the Palestine question and the Arab-Israeli conflict from 1947 through 1998. These include not only the Security Council and General Assembly resolutions, but also those of all the subsidiary organizations and specialized agencies that have dealt with the various manifestations of these issues.

The volumes are designed for easy use. Each includes a subject guide and a chronological listing of the resolutions by agency of issue. A cumulative index follows Volume III; Volumes IV and V contain their own index. In addition to the voting lists that follow each resolution, all five volumes include as appendices Security Council and General Assembly voting tables, enabling the reader to trace votes for any given resolution as well as voting patterns over the years of individual member states.

The United Nations Resolutions collection is an authoritative reference work that should prove invaluable to UN delegates, diplomats, academics and foreign offices all over the world.

George J. TOMEH, born in Damascus, Syria in 1922, has represented the Syrian government in various capacities since 1945. He served as Consul General of the United Arab Republic (Syria & Egypt) in New York, Permanent Representative (Ambassador) of the Syrian Arab Republic at the United Nations. He was also appointed as Minister of Economics of the Syrian Government in 1964, and later adviser to the Institute for Palestine Studies. One of the leading Arab scholars and intellectuals, Professor Tomeh has written many books in Arabic and in English.

Regina S. SHARIF was a former member in the International Affairs Department of the Institute for Palestine Studies.
Michael SIMPSON graduated from Oxford University and received his Ph.D. from Princeton. He was the first managing editor of the Journal of Palestine Studies (1972-1978).
Jody BOUDREAULT, a graduate of Cornell Law School, is a Law Practice Professional.
Katherine LARIVIÈRE is a free lance editor and a former editorial assistant of the Journal of Palestine Studies (1987-1988).
Ida AUDEH is a technical writer in Boulder, Colo. She is the compiler, translator, and editor of interviews conducted in Jenin refugee camp, Bethlehem, and Nablus following Israel's invasion of the Palestinian territories in April 2002.