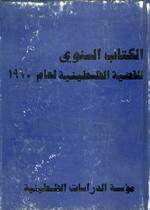 This series of comprehensive yearly volumes depicts the history of the Palestinian cause and the Arab-Israeli conflict at all levels and in all domains. It relies on a descriptive presentation of events as well as analytic narratives. Each volume has been edited by a group of specialized scholars and researchers. The series attends to different aspects of the Palestinian cause and the Arab-Israeli conflict, ranging from the political to the economic, social, and military. It aims to provide an overview for its intended audience of Arab officials, scholars, and researchers. The series’ ultimate goal is to forge a deeper Arab understanding of the Palestinian cause and a more accurate and comprehensive evaluation of the political context in which it arises.

Burhan DAJANI (1921 - 2000) was a prominent economist, academic, intellectual, and man of letters. He was a founding member of the Board of Trustees of the Institute for Palestine Studies, a member of the Economic Advisory Council of the League of Arab States, and served for over fifty years as General Secretary of the General Union of Arab Chambers of Commerce, Industry, and Agriculture. Considered one of the most significant Arab intellectuals of his generation, Dajani was characterized by the diversity of his scholarly concerns and his broad cultural interests. Dajani died in Amman on 15 September 2000.