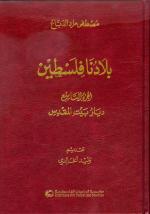 This book constitutes the second edition of volume 9 of the book: “Palestine: our Homeland”, whose first edition was issued in Beirut by Dar Al Taliaa publishing house in 1965. This part tackles the history and geography of towns and villages in the territory of Beit al-Maqdis, including the districts of Jerusalem (Al Quds), Ramallah, Bethlehem and Jericho.