Main documents on the Palestine question: from the archives of the General Secretariat of the Arab League; First collection: 1915-1946 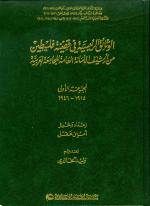 Main documents on the Palestine question: from the archives of the General Secretariat of the Arab League; First collection: 1915-1946

Documents of volume I cover most of the British mandate period that resulted from the First World War. It is evident that the chosen documents discuss mostly the diplomatic or political aspects of the case’s developments regardless of the military or warfare aspects. The convenience of publishing these documents seems to augment with the intriguing intersection between the dates of publishing these documents and the annual anniversary – within the next three or four years – of some of these dates or events documented, such as: the 100th anniversary of Hussein-McMahon Correspondence (1916-2016), the 100th anniversary of Sykes-Picot Agreement (1916-2016), the Balfour Declaration (1917-2017), the 70th anniversary of the United Nations Partition Plan for Palestine (1947-2017), and the 70th anniversary of the 1948 war (1948-2018).

Amin Musa AQL, born in Jerusalem in 1900, he studies Law in Jerusalem and worked with Mufti Haj Amin Al-Husseini during the time of the British Mandate. He was arrested for two years by the Mandate authorities; he worked as a lawyer and judge in Jaffa; then became Secretary of the National Committee of Jaffa in 1948; and was elected a Minister in the All-Palestine Government of 1948. He worked at the Political Administration Dept. of the Arab League, died in London in December 1970 and was buried in Cairo.