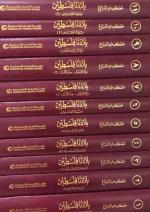 Comprised of 11 volumes, the author of this encyclopedia, Mustafa Murad El Dabbagh, based his research on various writings by Muslim chronologists and geography experts, several Arabic and translated history texts, and Arabic dictionaries, along with magazines and newspapers. The encyclopedia covers Palestine’s geographical location, area, population, natural zones and administrative areas, history since prehistoric epochs including the history of Semitic and Arian peoples who inhabited it, as well as the arrival of Jews there, reaching to the era of Roman rule and Arab tribes before Islam. The encyclopedia covers also the history of Gaza Strip since the Arab - Islamic conquest, the geography of towns and villages in Gaza area (Gaza and Bir el-Sabe districts) the history and geography of Nablus’ territory: the districts of Nablus, Jenin, Tulkarem; in addition to Yafa’s territory, Hebron’s territory, Galilee’s territory- Jund al-Urdunn and finally the territory of Beit al-Maqdis.