Children of Palestine: Experiencing Forced Migration in the Middle East 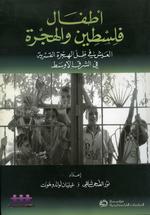 Children of Palestine: Experiencing Forced Migration in the Middle East

Palestinian children and young people living both within and outside of refugee camps in the Middle East are the focus of this book. For more than half a century these children and their caregivers have lived a temporary existence in the dramatic and politically volatile landscape that is the Middle East. These children have been captive to various sorts of stereotyping, both academic and popular. They have been objectified, much as their parents and grandparents, as passive victims without the benefit of international protection. And they have become the beneficiaries of numerous humanitarian aid packages which presume the primacy of the Western model of child development as well as the psycho-social approach to intervention. Giving voice to individual children, in the context of their households and their community, this book aims to move beyond the stereotypes and Western-based models to explore the impact that forced migration and prolonged conflict have had, and continue to have, on the lives of these refugee children.

Dawn CHATTY, Ph.D. (1975) in Social Anthropology, University of California at Los Angeles, is Reader in Anthropology and Forced Migration at the University of Oxford. She has published extensively on pastoral nomadism, forced settlement and sustainable development including Conservation and Mobile Indigenous Peoples: Displacement, Forced Settlement and Sustainable Development (Berghahn, 2002) edited with Marcus Colchester.

Gillian Lewando HUNDT is Professor of Social Sciences in Health and Director of the Health Institute, University of Warwick. Her work addresses global issues of power, discrimination and inequity in different local contexts through a focus on health and illness. Currently she is conducting research in England and South Africa and has spent many years living and working in the Middle East where she conducted research on health issues of Palestinians.

Bassem SIRHAN is a Palestinian sociologist and scholar who taught in several universities in the Arab countries. He has a number of studies and researches on various aspects of the Palestinian society in the Diaspora.