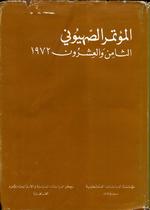 The Twenty Eighth World Zionist Congress was held in Jerusalem in 1972. This volume contains a complete translation of the Hebrew text of the minutes of the meetings, the reports submitted to the agencies of the WZO concerning their activities between January 1968 and September 1971, as well as all appendices. The volume contains three main sections, successively covering: 1) reports submitted to the Congress by 19 agencies of the WZO; 2) discussions of these reports over 22 sessions; 3) resolutions issued by the Congress concerning political, legal, informational, and intellectual issues; local Zionist organizations; relations with world Jewry; immigration, absorption, and settlement; social issues in Israel; issues concerning youth, students, education, and culture; financial affairs; and elections. Among the most prominent topics that dominated the discussions was “the Jewish people and Zionism: challenges and tasks,” including the related issue of “who is a Jew”; Jewish education, Zionist culture, and the means of connecting world Jewry to Israel, particularly youth; encouragement of immigration to Israel; and the place of Israel in the everyday life of Jews. In addition, the Congress discussed the issue of “Israel, Zionism, and Jewish education in the Diaspora,” including the question of the role of the educational role of the Zionist movement in strengthening loyalty to Israel; the question of the dual loyalty of Jews around the world; and Zionist activity among Jewish communities in the Arab world. Finally, the issue of immigration and absorption received the most attention, in addition to settlement in the occupied territories. The historic opportunity provided by Soviet Jewish immigration was emphasized, as well as the challenges posed by their arrival and absorption, and the failures of the Israeli government and the Zionist movement to adequately plan and prepare for their absorption. Also discussed was Israel’s position on political settlement talks, and Israeli Foreign Minister Abba Eban’s remarks on secure borders referred to the Golan Heights and Sharm al-Shaykh. The volume contains four indices, including speakers, topics, and a general index.

Born in 1932 in Western Galilee in Palestine, Elias SHUFANI became an Israeli citizen after the conquest of the region by Israel in the 1948 war. He graduated from the Hebrew University, Jerusalem, and Princeton University, New Jersey. He served as head of Research and Israeli Studies at the IPS in Beirut and is the author of several works in Islamic history and the Palestine problem.