Palestine, Congress, and the White House 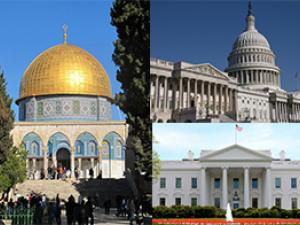 President Donald Trump is preparing for his first official meeting with Israeli Prime Minister Benjamin Netanyahu on February 15, 2017. After months of speculation, the upcoming meeting promises to be revealing as political leaders, analysts, and commentators attempt to discern the new administration’s position on the Israeli-Palestinian conflict. Will Trump adopt a radically different approach than his predecessors–one even more biased in favor of Israel?

During his campaign, President Trump vociferously supported PM Netanyahu’s policies, inspiring the Israeli slogan “Make Israel Build Again,” in reference to illegal settlement construction in occupied Palestine. President Trump signaled a shift from what he often described as President Barack Obama’s mistreatment of Israel. Trump promised to forge an even closer and stronger Israeli-American alliance. Just three weeks after his inauguration, however, Trump seems to be taking a more measured approach. Talk of relocating the U.S. embassy from Tel Aviv to Jerusalem has dwindled, and it is increasingly unclear whether his nominee for ambassador to Israel--anti-Palestinian financier of illegal settlements David Friedman--will be confirmed amid growing opposition. Many U.S. and foreign officials continue to warn against Trump’s pro-Israel bluster, both publicly and behind closed doors.

On February 2, 2017, the White House released a statement that seemed to aim at containing Israel’s evident joy at the prospect of cooperating with President Trump. The working assumption in Israel is that Trump will be better than Obama for settlements. The White House statement reads:

While we don’t believe the existence of settlements is an impediment to peace, the construction of new settlements or the expansion of existing settlements beyond their current borders may not be helpful in achieving that goal.

Less than a week after the statement was released, Israel adopted legislation that retroactively legalized over 4,000 illegally settlement units built on privately owned Palestinian land. This legislation was preceded by an announcement that an additional 2,500 settlements were green-lighted for construction.  These developments legitimize past and future seizures of private Palestinian land, and have drawn wide criticism.

Defying Israeli expectations, President Trump said during an interview with an Israeli newspaper that he is “not someone who believes that advancing settlements is good for peace.” It is evident, just three weeks in, that his presidency is one of dramatic fluctuations, not only where Israel and Palestine are concerned, but also in regard to his other campaign promises.

This month’s Special Focus: Palestine, Congress, and the White House, features nine Journal of Palestine Studies (JPS) articles* and three recent JPS Congressional Monitor reports that, together, illuminate Palestine’s status amidst these fluctuations in an historical context. Focusing on the role of various U.S. administrations, five of these articles highlight the ways that the White House often deviously navigated the tumultuous road to peace in the Middle East.

Four additional articles examine how the question of Palestine is addressed in Congress. Unsurprisingly, the executive and legislative branches of the U.S. government do not always see eye-to-eye on Israeli-Palestinian affairs. In fact, the White House has been far more cautious than Congress in recent years, if not opposed to some Israeli policies, as was Mr. Obama. In Congress, however, pro-Israel fervor knows no bounds. According to the GovTrack database, a total of 950 bills or measures pertinent to “Palestine” and “Palestinians” have been introduced since the 93rd Congress (1973-1975), including the current 115th session of Congress, during which 147 bills or measures have been enacted. The Congressional Monitor provides a snapshot of the 113th and 114th sessions of Congress, where 211 and 178 measures pertinent to Palestine were introduced, respectively. Needless to say, none of these hundreds of acts of Congress paid the slightest attention to Palestinian claims, concerns, and rights while all were obsequiously attentive to the demands of the Israel lobby, which in fact drafted many of them.

*The articles will be available at no charge for the remainder of February 2017. You can purchase a subscription for the Journal of Palestine Studies HERE.

Truman the Politician and the Establishment of Israel
Lawrence Davidson
Journal of Palestine Studies, Vol. 39 No. 4 (Summer 2010), pp. 28-42