Southern Lebanon, An Arena of Contestation 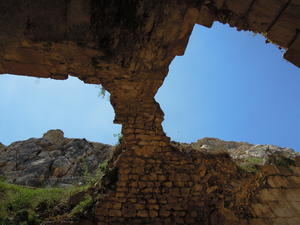 Southern Lebanon, An Arena of Contestation

“Pity the Nation,” British journalist Robert Fisk titled his account of the 1975-1990 Lebanese Civil War. Colleague and fellow Englishman David Hirst chose “Beware of Small States” for his own survey of the nation he defined as the “battlefield of the Middle East.” The unfamiliar reader glancing at such titles may reasonably surmise that the nation’s contemporary history has been dominated by conflict and devastation. Even though the Lebanese Civil War officially ended more than two decades ago, the small nation, bordered by Syria and Israel, remains a contested ground for several regional and non-regional nations vying for influence. Lebanon is home to a domestic political scene more accustomed to tension and uncertainty than anything else and seemingly forever on the precipice of a renewed armed struggle for political dominance between the Christian, Sunni, Shia and Druze factions that coexist in a confessional arrangement.

Israel, citing the pretext of Palestinians guerillas using the territory as a launching ground for militant attacks, first invaded the region in 1978. This invasion was short-lived, but it did spawn the Israeli effort to train and arm right-wing Maronite Christians aligned against the Palestinians and the country’s ascendant Muslim majority with the aim to reconfigure a confessional arrangement that afforded Maronites predominant political control of the state.

In 1982, Israeli troops marched into southern Lebanon and all the way to Beirut. Although Israel eventually withdrew from the Lebanese capital after achieving its objective of expelling Palestinian political and armed factions (who sailed to Tunisia), the Israel Defense Force occupied southern Lebanon, and the aforementioned embryonic (mostly) Christian forces formed into the collaborationist South Lebanon Army (SLA). The SLA would severe as Israel’s surrogate army, and Israeli forces would outsource many of the crueler aspects of occupation, such as torture, to this auxiliary force while claiming clean hands.

Occupations beget resistance and Israel soon traded the Palestine Liberation Organization for the far more formidable Hizballah, a Shia paramilitary organization. Today, Hizballah, deemed a terrorist organization by Israel and the United States, is the most heavily armed force in Lebanon and an active participant in the nation’s politics, with legislators in the parliament and ministers in the cabinet. Its sustained guerilla operations eventually forced an Israeli withdrawal, with SLA fighters and their families in tow, in May 2000. In 2006, Israel and Hizballah fought a month-long summer war to a seeming draw. Tensions between the two antagonists remain high to this day frequently raising fears of renewed violence. In much of south Lebanon, Hizballah, not the reigning Lebanese government, is arguably the preeminent political power.

Southern Lebanon also harbors several Palestinian refugee camps; including the largest camp, Ain al-Hilweh. The camps are isles, as it were, separated from their surroundings by a discriminatory legal framework that restricts camp residents’ rights to work, build and even leave the camp.

From left to right, clockwise: May 2014 pro-Hizballah rally marking the anniversary of the end of Israeli occupation, locals walk through destroyed buildings after an Israeli invasion of Tyre in August 2006, peacekeppers from the United Nations Interim Force in Lebanon (UNFIL) monitor the Lebanese-Israeli border, and Palestinian refugees attempt to cross into Israel at the Israel-Syria border in May 2011.

As the Lebanese political system remains bitterly divided, with an absent president and an idle parliament, and the civil war in Syria continues unrelentingly toward greater destruction, southern Lebanon may emerge, once again, as a battlefield. The territory is an area of contestation between fiercely opposed regional forces: between Iran, its proxy Hizballah, and their ally in Damascus, on the one hand, and Israel, Egypt and the Arab Gulf monarchies, on the other. Impose onto this scene the domestic faction of Sunnis aligned with the latter regional forces and the Christian community divided between pro and anti-Hizballah parties. Currently, Lebanon remains stable, but southern Lebanon may determine the country’s future trajectory. If an Israeli-Hizballah war erupts, implicating all the above-mentioned powers, the south will be the main arena of conflict.

It is precisely for this reason that we have decided to highlight the recent history of south Lebanon for our July Special Focus – Southern Lebanon, An Arena of Contestation by making available articles* from our Journal of Palestine Studies archives.

Reconsidering the Struggle over UNIFIL in Southern Lebanon

"Mr. UNIFIL" Reflects on a Quarter Century of Peacekeeping in South Lebanon

Hizballah and the Israeli Withdrawal from Southern Lebanon

The Current Political, Organizational, and Security Situation in the Palestinian Refugee Camps of Lebanon

Hizballah, Syria, and the Lebanese Elections

From the Israeli Press

July Book of the Month

Manifestations of Identity: The Lived Reality of Palestinian Refugees in Lebanon by Muhammad Ali Khalidi

Palestinian Refugees in Lebanon are often discussed in sensationalist or objectified terms in the context of various crises. The essays collected in this volume attempt to look beyond the crises, undertaking to examine the Lived reality of Palestinians in Lebanon and the variety of ways in which they manifest their Palestinian identity.