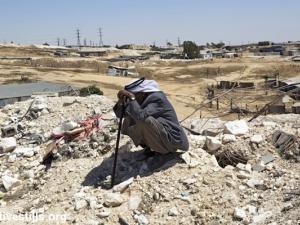 A man sits on the ruins of his house, hours after it was demolished by Israeli forces, in the unrecognized Bedouin village of Wadi Al Na’am in the Negev, May 2014. Wadi Al-Na’am is the largest unrecognized village in Israel, home to 13,000 Palestinians; most of whom were displaced from elsewhere in Israel. (Keren Manor/Activestills)

On June 9th, 2016, Israeli bulldozers accompanied by a squad of police officers stormed the Palestinian Bedouin village of al-Araqeeb in the Negev desert in southern Israel. For the residents, it was a familiar sight. Al-Araqeeb – an unrecognized village, according to Israel – had been stormed and its makeshift structures destroyed 89 times already. This was the 90th such operation. Al-Araqeeb’s experience is far from unique. Numerous Bedouin villages have been razed, often repeatedly, by successive Israeli governments which view the centuries-old Bedouin communities as dispensable obstacles in the way of development plans for Jewish towns in the Negev.

Prior to the founding of the State of Israel, the Bedouins’ claim to the Negev was hardly in question. As of 1935, they cultivated 2,109,234 dunums of land (1 dunam = .24 acre) where they grew most of Palestine’s barley and much of the country’s wheat. In 1946, 100,000 Bedouins lived in the Negev. The first Jewish settlement there was not established until 1940 and by early 1946 the number of Jewish settlements had grown to four with a combined population of 475. These facts give the lie to the old Zionist trope that European Jewish settlers had arrived in Palestine to “make the desert bloom.” Jewish land cultivation in the Negev amounted to 21,000 dunums in 1946. To put matters into further perspective: the amount of land cultivated by the Bedouins in the Negev prior to 1948 came to three times that cultivated by the entire Jewish community (the Yishuv) in all of Palestine even after sixty years of “pioneering” Zionist settlement.

Nevertheless, and despite its meager holdings, the Yishuv was determined to incorporate the Negev into a future Jewish state. In October 1946, two weeks after U.S. President Harry Truman endorsed the Jewish Agency’s proposed Jewish state, the Yishuv established 13 new “agricultural” communities housing soldiers of the Palmach Brigade, the elite unit of the Hagana (the Yishuv’s paramilitary), in order to buttress the Zionist claim to a land nearly wholly Arab in presence and livelihood. In 1948, after the outbreak of a civil war between Palestine’s Arabs and Jews, the Negev was conquered by the Israel Defense Forces, the heir to the Hagana.

Today, as the case of al-Araqeeb illustrates, the Bedouin no longer retain the rights even to those lands on which their villages sit. The story of how the Bedouin lost their patrimony and continue to face dispossession is the story of official state discrimination.

Israel’s 1965 Planning and Building Law recognized the sum total of 124 Palestinian villages, thereby denying the existence of dozens of mainly Bedouin villages in the northern Galilee and southern Negev. Although these villages predate Israel’s existence, they have been treated as illegitimate by the Israeli state, which has virtually criminalized their existence: So-called unrecognized villages are neither connected to the water and sewage system nor to the electricity grid, the state provides them with no health or education services such as schools or clinics, and all dwellings are subject to demolition at any moment. It is such a discriminatory reality that has forced 100,000 Bedouin in the Negev to leave their ancestral lands for bleak and economically depressed “planned townships” constructed by the state. Once the Bedouin are compelled to leave their homes, the Israeli state then expropriates their property for the development of Jewish towns. Many Bedouin, however, have refused to leave their homes and today nearly a tenth of Israel’s Palestinian citizens – roughly 130,000 individuals – live in so-called unrecognized villages under constant threat of wholesale demolition.

Most recently, the Israeli government unveiled the Prawer Plan in 2013 to relocate 40,000 Bedouins as part of a larger effort to settle one million Israeli Jews in the Negev. Since its heyday, Zionism’s goal has always been to increase its control over the land while minimizing the Arab presence, and Israel’s political establishment has nurtured a constant obsession with the demographic balance between Arabs and Jews in the country. This concern with demography extends not only to numbers within the country after Israel established a dominant Jewish majority in the wake of the 1948 War which saw the eviction of 750,000 Palestinians (the Nakba – the Catastrophe in Arabic) but to regional demographics. Now that it has carried out its “Judaizing” of the Galilee, Israel has turned its sights on the Negev.

The Negev constitutes more than half of Israel’s territory, and advocates for the Bedouins' territorial and civic rights have indicated that there is plenty of room for Jewish settlers, hundreds of thousands of them. Israel can settle Jewish Israelis there without infringing on Bedouin land and forcibly relocating its owners, they argue. Following the eruption of largescale protests in opposition to the Prawer Plan, the Israeli government shelved the legislation in late 2013. But as the case of al-Araqeeb illustrates, the state has not stopped wholesale demolitions of Bedouin villages as a means to force the residents off their land. While the massive relocation of tens of thousands of Bedouins is currently on hold, incremental acts of indignity continue unabated. Given history, both current and past, it’s safe to assume that the Bedouins in Israel and the West Bank will continue to wage a daunting struggle to preserve their land and livelihood in the face of a formidable foe.

For our July Special Focus - Palestinian Bedouins we present a series articles from the Journal of Palestine Studies and the Jerusalem Quarterly that recount the historical and contemporary struggles of the Bedouins since 1948.

The Negev Land Question: Between Denial and Recognition

This article explores the legal issues and policies surrounding Bedouin land ownership and dispossession in the Negev. By tracing the colonial legal trajectory—from Ottoman to British and finally, to the current Israeli adoption and development of legal doctrines—the author exposes an intricate manipulation of historical legal policies being used to further displace tens of thousands of Bedouin Arabs living in the Negev today. This displacement is further contextualized as not only legally steeped in colonial heritage, but also as part and parcel of an active, larger colonial Judaization scheme by the Israeli state towards its Palestinian citizens. This article discusses the most recent of these schemes in the Negev: the Prawer Plan.

The Invisible People Come to Light: Israel's "Internally Displaced" and the "Unrecognized Villages"

This article focuses on the "internally displaced" and the "unrecognized villages" in the context of the activism by Palestinian citizens of Israel in the last decades. Despite indifference, isolation, and various local and regional obstacles, they have recently achieved international legal recognition of their rights, even amid ongoing dispossession and transfer. 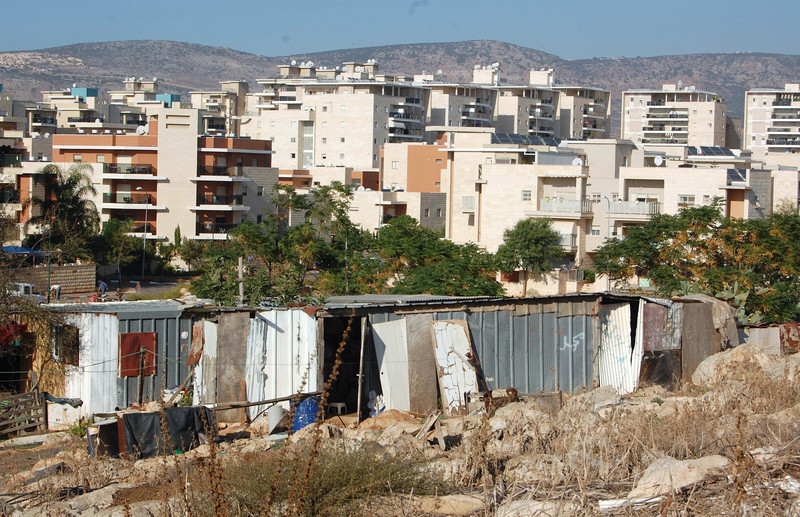 The struggle for Palestine has always been a struggle over land-land as space, and land as resource. This struggle continues, not only in the territories occupied by Israel in 1967, but even within the "green line"- the pre-June 1967 borders of the Israeli state - in areas of significant Arab population. The means through which the Israeli government wages this struggle is the policy of Judaization, which aims at achieving a demographic balance in favor of the Jewish population through so-called "regional planning," and more specifically through the contrasting processes of dispersing new Jewish settlements while at the same time controlling the physical expansion of Palestinian villages.

Residents of the Palestinian Bedouin village of Ramiya in the Galilee (foreground) threatened with the dispossession as the Jewish neighborhood of Karmiel continues to expand near their homes. (Jillian Kestler-D’Amours/The Electronic Intifada)

Israeli State Policy toward Bedouin Sedentarization in the Negev

Processes of spontaneous sedentarization were observed among both Negev and Galilee bedouin in the beginning of the twentieth century in Palestine under Ottoman rule and in the Mandatory period. However, the establishment of the state of Israel in 1948 led to the creation of a new sociopolitical and demographic situation and the sedentarization process was interrupted. The Israeli authorities then began to introduce new forms of sedentarization.

A Bedouin man sits next to the ruins of his house in the unrecognized Negev village of Wadi Al Na’am after Israeli forces demolished it. (Activestills.org)

How Israel Controls the Bedouin in Israel

Bedouin groups in Israel have been frustrated in their attempt to improve their lives and welfare in a rapidly changing world. They have not been permitted to continue their traditional pastoralism, nor have they been granted the opportunity to develop an adequate agriculture for their own land. Due to the restrictive measures that were introduced and enforced, the Bedouin have naturally experienced significant and rapid changes in their economic and social life. Nearly all aspects of Bedouin life have been affected and these changes have shaken, and now threaten, the very roots of their culture. 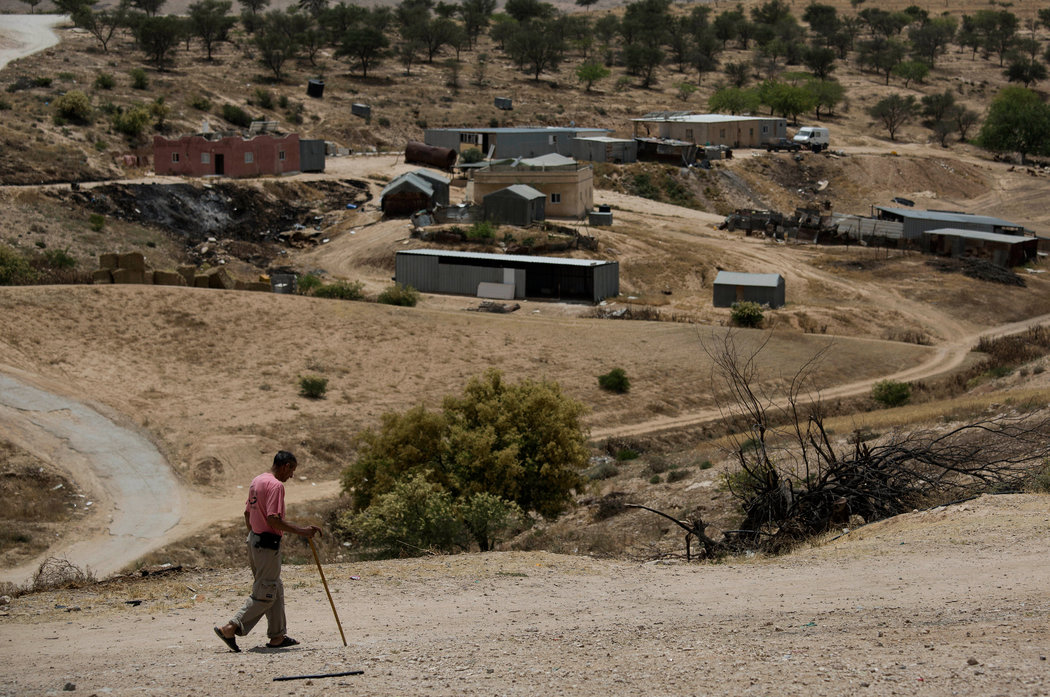 David K. Shipler, in an article in the New York Times (December 26, 1981), described the brutal methods used by the Israeli government, operating under the cover of a Ministry of Agriculture “green patrol,” to force the Bedouins of the Negev off their lands and into closed zones. Though Israeli harassment of the Bedouins is not new and thousands of dunums of land have already been expropriated, Shipler’s account illustrated how “harassment” can give way to more direct methods of intimidation. The account, “Israelis Drive Bedouins of Negev into Closed Zones,” is reprinted here.

1,000 Bedouins in Umm al-Hiran, in the Negev, face demolitions and evictions as Israel intends to replace the village with a Jewish settlement with the same name, Hiran. (Tsafrir Abayov/Associated Press) 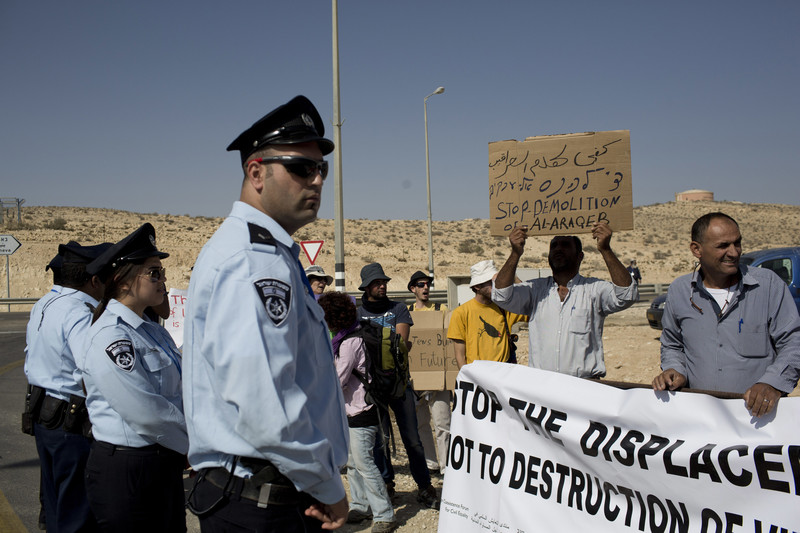 Israel and the Bedouin of the Negev

The population of Bedouin in the Negev decreased sharply during the fighting and the creation of Israel, and the introduction by the Israeli government of a military administration led to a subsequent reduction of nomadic areas to which the Bedouin had traditionally seasonally migrated. This was one of the first and major factors which was profoundly to affect, influence and shape the behaviour and living patterns of the Bedouin in future years.

Protests in 2013 against the Prawer Plan. (Oren Ziv ActiveStills) 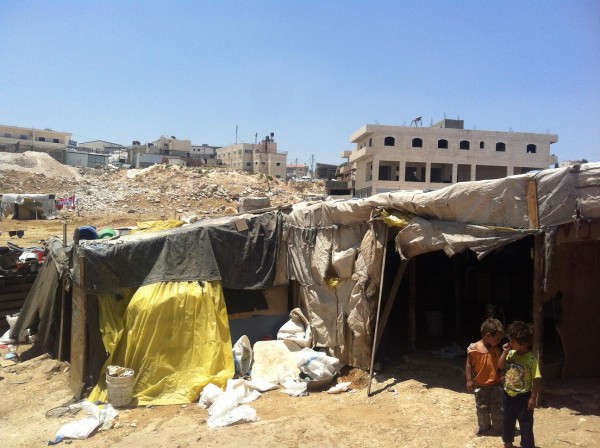 In 2014, the Israeli Civil Administration announced a plan to relocate about 12,500 Bedouins residing in different communities in the governorates of Ramallah, Jerusalem, and Jericho to the lands of al-Nu‘ayma village, near the city of Jericho. This study will attempt to explore and analyze the social, cultural, and economic impact this plan will have on the lives of the targeted Bedouin communities

Bedouin community of ‘Anata, northeast of Jerusalem, whose residents are surrounded by the Israeli separation barrier and illegal settlements. (ISM)

Off the Map: Land and Housing Rights Violations in Israel's Unrecognized Bedouin Villages

The following is the summary of an extensive report released by Human Rights Watch. Discriminatory land and planning policies have made it virtually impossible for Bedouin to build legally where they live and also exclude them from the state’s development plans for the region.

The report, written by Hana Hamdan of Adalah, describes the emergence and use of a new kind of settlement designed to preserve state lands, primarily against bedouin inhabitants of the Negev.

While most of these articles are only available for this month, you can have access to our entire archives if you Subscribe to the Journal of Palestine Studies.

Generous contributions from people like you make it possible for us to preserve Palestinian heritage and defend Palestinian rights. Make a tax-deductible donation today!