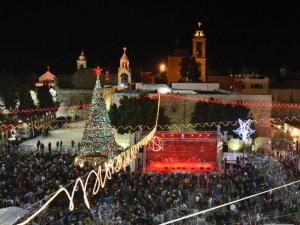 The tradition of Christmas in Palestine is a deeply rooted one. Bethlehem, the birthplace of Jesus Christ at the Church of Nativity, has always been an integral part of Palestinian identity and heritage, and is home to some of the earliest Christian communities on earth. Palestinian Christians have harmoniously stood together with their Muslim fellow citizens on the frontlines of preserving culture and safeguarding religious holy sites in the face of the challenges to Palestinian identity. Examples of this unity abound, whether it is in the Muslim family that holds the keys to the Church of Holy Sepulchre in Jerusalem; or Father Manuel Musallam’s call for Muslims to pray at churches in the aftermath of Israel’s destruction of mosques during its assault on Gaza in 2014.

Today, Palestinian Christians comprise approximately 2% of the total population in the Occupied Palestinian Territories. An estimated 51,000 live in the West Bank, East Jerusalem, and Gaza, mostly in the cities of Ramallah, Bethlehem, Nablus, and East Jerusalem. The city of Bethlehem is home to approximately 22,000 Palestinian, 18% of whom are Christians that belong to many denominations. These include Greek Orthodox, Roman Catholics, Armenian Orthodox, Copts, Episcopalians, Ethiopian Orthodox, Greek Catholics, Lutherans, Maronites, Syrian Orthodox, Mormons, and several other Protestant denominations.

Every year, Palestinian Christians and other pilgrims converge on the city of Bethlehem to celebrate Christmas. While the journey for most people is a spiritual one, it is also especially political for Palestinian Christians whose city has been besieged by the Israeli occupation. Twenty-two illegal Israeli settlements built on city lands, the illegal separation wall which chokes the city, and more than 30 roadblocks in the area, have severely impacted the livelihood of residents, and indeed their ability to move freely and visit holy sites in Bethlehem and beyond.

For this month’s Special Focus – It’s Christmas in Palestine, we are featuring articles* from the Journal of Palestine Studies and Jerusalem Quarterly that provide an insight into the life of Christians in Palestine throughout the years.

*Articles from the Journal of Palestine Studies will only be accessible for the reminder of December 2016.

The Christian Churches of Jerusalem in the Post-Oslo Period
Michael Dumper
Journal of Palestine Studies, Vol. 31 No. 2, (Winter 2002), pp. 51-65

Music-Making in the Heart of the Christian Quarter
Adriana Ponce
Jerusalem Quarterly 10 (2000), pp. 39-42