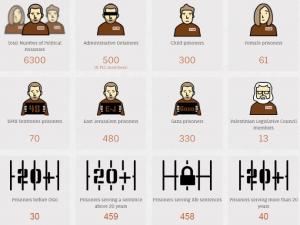 Over 800,000 Palestinians have been detained or imprisoned by Israel since 1948, according to a joint survey by the Palestinian Central Bureau of Statistics, Commission of Detainees and Ex-Detainees Affairs, and the Palestinian Prisoners Club. Published to mark Prisoners Day on April 17, the survey highlights one of the many practices Israel has deployed to displace Palestine’s indigenous population. Indeed, the deployment of discrete legal systems — one for Israel’s own citizens granting preferential treatment to Israeli Jews and another for those Palestinians who are subject to military occupation — coupled with the continuing illegal construction of walls, fences, and checkpoints, leads to the conclusion that the occupation “can be seen as a carceral enterprise, which is designed to control, confine, and dominate the Palestinians.” Yet, Israel’s design of the prison experience is not the same across all of the occupied territories. The blockade of the Gaza Strip is perhaps the most extreme version of the Israeli system of mass imprisonment. Meanwhile, in the West Bank and Jerusalem, arrests and administrative detention are the dominant practices.

As at this writing, 6,300 Palestinians are being held in Israeli prisons, including 500 administrative detainees, 300 children, and 13 Palestinian Legislative Council members, according to Addameer — the Prisoners Support and Human Rights Association. In the almost seventeen years since the second intifada broke out on September 28, 2000, nearly one hundred thousand Palestinians have been imprisoned, including 27,000 under unlimited administrative detention. Those imprisoned included15,000 children below the age of 18 years old, according to the survey.

For this month’s Special Focus, Israeli Prisons and Palestinian Lives, we make available ten articles* from the Journal of Palestine Studies and the Jerusalem Quarterly. Together, these articles examine Israel’s carceral regime from a variety of lenses, including that of international law and human rights, security coordination by an increasingly unpopular Palestinian Authority, and the Oslo Accords. In anticipation of the Journal of Palestine Studies’ forthcoming publication of an interview with human rights lawyer and long-time activist Khalida Jarrar, this edition of Special Focus also features the contents of a dialogue with veteran political prisoner Marwan Barghouti.

*Available for free for the remainder of this month, April 2017.

Interview with Marwan Barghouti
Life and Politics in Prison, National Unity, and the Resistance
Journal of Palestine Studies, Vol. 43 No. 4, Summer 2014; (pp. 57-65)